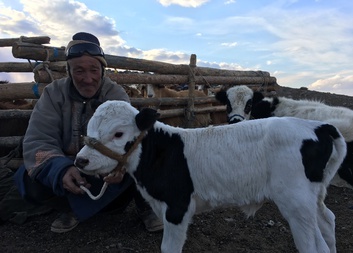 Dzud emergency response field team of CCR facilitated to deliver food items to Mr. Erdene-Orgi Tseveg’s home as he was unable to come by himself to the food distribution in Delgerekh soum of Dornogovi aimag on April 16, 2016.  During his home visit, there was a brief discussion about winter-spring situation. 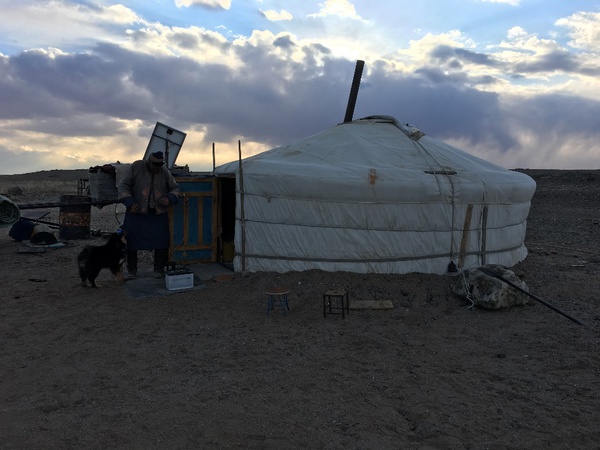 Mr. Ts. Erdene-Orgi, 74 year-old and single, is herding his cattle and living healthy in a place called Tsagaan-Ovoo of Delgerekh Soum. While his children live separately, they visit to help their father. He and his son had a total of 100 flocks of cattle but suffered a considerable damage of losing 60 cattle (40 large cattle, 20 small cattle) this winter.

There was no grass for animals/cattle to eat because of early snowfall in the past autumn and following winter. As a result, animal beestings deteriorated thus causing high number of livestock loss. Many of the cattle got cold and physically fatigued because temperature was negative 39-40 degrees this winter.

“I am critical about youth these days; there is a famine/dzud of laziness in them on top of weather dzud” because young generation of now is used to operating motorcycles and other vehicles as a transportation and freight instead of horses and camels. “I had proposed to the authorities about establishing “Camel farm” in order to improve youth employment and livelihoods but it still is not in work” he conveyed.

“I'm very happy about food assistance. Although it is spring, it hasn’t started to warm up and grow grass; thus both people and animals are getting tired because of lack of food and not enough pasture.

I think that food is the most important aid at this moment. Food, warm clothes, felt boots and fur deel (coat) are essential for herders, but right now food is very important as well as communication tools.

I live alone, so I was just recently provided with a phone. And now, I have food because of your assistance. These food items will last me more than a month. I am in need of ready food items because there is too little time during spring calving. I think that rice will be finished sooner than the rest of the food items. I would like to forward my gratitude to those noble people who have helped with this food assistance.

The main feature of herders is living with each other’s support. In our soum, herders support each other in herding livestock, migrating to places, watering cattle etc. Even now, our soum authorities have brought you all to bring food items to old lad like me,” Mr. Orgih happily declared.

Humanitarian aid in Mongolia is financed by European Comission.