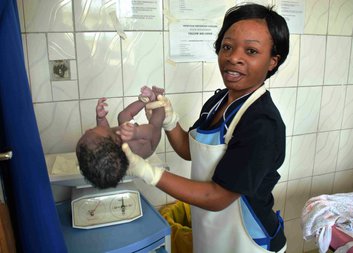 Childbirth care in Mongu in Zambia is improving

Also in 2016, Caritas workers improved the situation and reached new visible successes. For example the school for midwives in Lewanice started a new course “Registered midwife”.  It has increased the number of specialists in the West Province. Teachers have also received teacher training.  .

The lodging house for students coming for their medicine practice was established in the Health Centre in Nkeyema.

A centre for mothers was built in Nalikwanda. They can stay there until they deliver under health supervision. This has resulted in decreasing the complications associated with home childbirths or on the way to maternity hospital.

Doctors in the hospital in Lewanika have started using a mobile ultrasound screening and have expanded their service to other healthcare centres. They have examined 318 pregnant women during 17 tours to 4 centres.  Complications were detected in 5 women so they were transported to the hospital. The team of two Czech doctors and a midwife shared their skills with local staff.

35.253 inhabitants from West Province attended courses to improve mother and child care. These activities were coordinated by 124 volunteers.

Residents  from the other seven districts listened to radio programs concerning nutrition for  pregnant women, HIV positive mothers and children, prenatal and maternity care, assistance of men during pregnancy, ultrasound examinations and  vaccination of babies.

Activities of Caritas Czech Republic to support Zambian childbirth care were supported by Czech Development Agency and The Foreign Ministry of the Czech Republic.