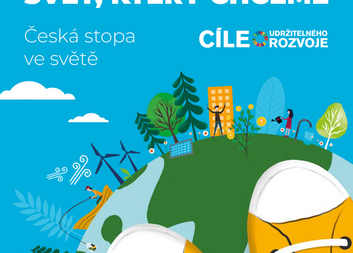 In the footsteps of a better future: Are Czechs helping to heal the Earth?

What kind of world do we want? The answer is given in a new handbook prepared by the Ministry of Foreign Affairs in cooperation with Caritas Czech Republic. The publication "The World We Want - The Czech Footprint in the World" focuses on the Sustainable Development Goals under the so-called Agenda 2030 and includes 17 main points. It focuses on, for example, the fight against famine and poverty, the right to health and social support all over the world, but also clean energy sources and the development of sustainable cities.

The Czech Republic is one of the 30 richest countries in the world and due to its geographical location, it can be considered to be among the luckiest in terms of natural disasters or war conflicts. It's sometimes hard to believe how serious the situation on Mother Earth really is. The pandemic we are facing now has become the first warning and has shown us how important it is to stick together and how strong mankind is, if we have a clear goal – which is to aspire for a better future.

Quality life for everyone

As many as 250 million children do not have access to education, every 6 seconds part of the rainforest the size of​​ a football stadium is irretrievably destroyed, and the natural fish population cannot be restored due to fishing. In recent years there have been outputs from scientists, celebrities, activists, and politicians, not only in the media, drawing attention to the impending catastrophe and the need to act immediately. We are the first generation that can eradicate famine and, at the same time, the last generation that can prevent a climate crisis.

UN member states, including the Czech Republic, responded to the situation in 2015 and formed the so-called Sustainable Development Goals, referred to as SDGs = (Sustainable Development Goals). It is a program called Agenda 2030, which deals with 17 main and 169 specific sub-points, including not only environmental protection, but the fight against social inequalities, assistance in extremely poor areas or the supply of drinking water. The aim is to find solutions to prevent humanitarian crises over the next 15 years.

Czech footprint and the sustainable world

The Czech Republic's contribution to the fulfillment of SDGs in the developing world is summarized in the Handbook The World We Want = Czech Footprint in the World, published by the Ministry of Foreign Affairs (MFA) in cooperation with Caritas Czech Republic, the UN Information Center in Prague, and the Social Responsibility Association. Caritas Czech Republic participated in the creation of the handbook within the Labyrinth 2030 program, which is part of Global Development Education.

You can find the handbook (in Czech language) here. It is full of incredible stories of Czechs who help with building a reservoir in war zones, strenghten women's rights in Zimbabwe or support agriculture in developing countries.

A printed version of the guide will be available later this year.