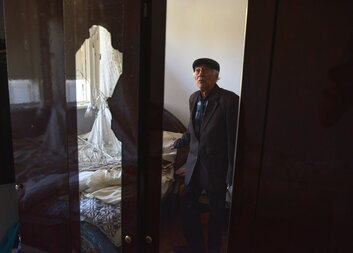 War forced tens of thousands of families out of their homes in Nagorno-Karabakh. Many of them believed they would be able to return home after ceasefire was signed between Azerbaijan and Armenia in November last year. The conflict was over, but certain areas of Armenia have newly become part of Azerbaijan. Many people have therefore nowhere to return to. Caritas is supporting displaced people, and is helping them find a solution in such challenging situation.

Thanks to the 25 years of experience working in the country, Caritas Armenia can provide fast and effective assistance to the refugees even in this emotionally draining situation. We offer a whole range of support, including medical and psychological care, payments towards rental bills, or house renovations. Since autumn of last year, more than 6 700 families received aid from us.

There was nowhere to come back to

One of the refugees is Shushik Matevosyan (her name has been changed), a mother of four children, who basically overnight lost all her life security. She and all of her children had to leave their home in the village of Nor Manashod, in Shaumyan region in the Caucasus Mountains. They have been staying in Armenian city Gavar since September. Since the fights broke out, Shushik had never doubted they would eventually be able to return home together.

However, as part of the ceasefire agreement, her house as well as the whole village officially became part of Azerbaijan. So there was nowhere to come back to. Shushik then turned for assistance to Armenian Caritas, where she receives material as well as psychological support.

There is a large number of people in a similar situation. Caritas Armenia is helping them across several regions of the country, including the capital city Yerevan, and distributing food and non-food item kits. The displaced families left their homes practically empty handed, which, considering how harsh winters in Caucasus are, makes matters even worse. To help families survive the tough winter, Caritas' staff has also distributed warm blankets, bedding items and electrical heaters to 650 households in the Ararat province.

The work of Caritas Armenia is funded by the European and the global Caritas network, as well as by foundations and other international organisations. Czech donors have also contributed. Archdioceses Caritas Olomouc has so far sent 140 thousand Czech crowns to help people in need in Armenia, and the appeal is still open.

You can still donate to support refugees from Nagorno Karabakh. The appeal account number is  55660022/0800, variabile symbol 157.