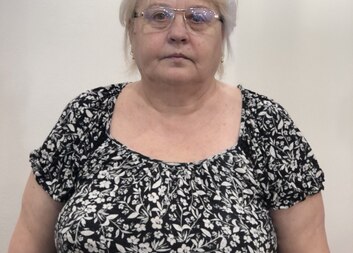 Ukrainian refugee: No one wanted to believe this pointless war would come. Then we heard the bombs

Ryabych Lyudmyla Mykolajivna from the town Rivne, the centre of the Volhynian Bohemians, escaped with her grandson from Ukraine. During their journey, they were stranded at the border in the middle of the forests. After arriving in Prague, she stayed at the Caritas hotel Marianeum. Read about why she did not believe the war started and what made her leave.

What was your job before you left Ukraine?

I am 66 years old, so I retired some time ago. I am a full-time grandmother. Before I worked in the service sector.

Describe the day you heard about the Russian invasion of Ukraine.

People were talking a lot about the invasion. The media said Putin was placing the troops close to the borders. There were reports about a possible upcoming invasion ionTV and on the internet. No one really knew when and we did not want to believe it. People thought it would be a pointless war. So we were minding our own business.

And then on February 24, my hometown Rivne was experiencing shooting. At six o'clock in the morning, the bombing started and with it the invasion itself. They fired on military objects in our town, on military bases, warehouses, gas stations and other strategic objects. After hearing the explosions, we understood the war is here.

We thought no war would happen: we did not know where the shelters are located

What did you do in the first moments of war?

People were panicking, of course. We believed there would be no war after all. This was a neighbouring state, our brotherly people with whom we had experienced so much together. There was no reason for them to attack us. The shelters were not ready and we did not even know where they were located. We did not find out until a few days later. People were running around during the day and sitting in the shelters and cellars at night as there were many air alert sounds around.

What were your thoughts and feelings when you realised the war has started?

I felt really scared. And a sense of betrayal, that this was a useless war by one unreasonable man. We are in our own country, not attacking anybody, not asking for anything and they came here to kill us.

Why did you decide to leave?

People around here were saying it. It was discussed on social media in our town group or in our chat with the residents of our house. In four days of the war, we became friends like never before. We started to help each other, discussing the situation about children and old people who could make the journey. I have very good friends in the Czech Republic with whom we have been friends for many years. They were concerned about us and said I should leave with our grandson. And so we did.

So you did not travel alone, you took your grandson with you?

Yes, I left with him. Everyone was taking their kids. There was a long queue at the border, I have never seen so many young families in one place. The men stayed. My husband and my other family members stayed in Ukraine too. They cannot go abroad and they do not want to leave. It is very difficult for me. I was crying during the whole journey because I left my home which I did not want to leave.

How did you get from the border crossing to the Czech Republic?

We got to Lviv by ourselves in a rented car, it is only about an hour and a half. Everyone was very nice. If someone had money to pay, they paid, if not, they got there anyway as someone else get them there. This is war and everybody understand the difficult situation. Our Czech friends were already waiting for us in Lviv.

We were waiting four days at the border with just a forest around us. The volunteers there helped us

Did you encounter any problems on the way?

No problems, we just had to wait for four days at the border to cross it.

Was there any humanitarian aid at the border?

Yes, they helped us a lot. They gave us food because the queue was very long and there was nothing, just a forest around. Apart from food, the volunteers brought us tea and warm blankets. I am very grateful for it. They helped all the people in the traffic and then at the border.

How was the journey after crossing the border?

Everything was fine. We managed to cross the border before they started shooting at Lviv. I was very worried about the people who got stuck in the traffic there. I think they let people through the border crossing very slowly, it should be faster in such a situation.

When did you come to Prague?

Last night. We checked into a hotel here right away. My friends said it would be a safe place to go.

It is difficult to talk about future plans, but do you plan to return home?

If there is a place to go back to, then yes, I will definitely go back. Half of my family is still there.

What about other family members and friends, do they plan to come here as well?

There are a lot of people who want to stay in Ukraine. I would have stayed too if my grandson would have been taken care of. But it is really difficult. Putin attacked us today, are there any guarantees he will not do it elsewhere when the situation gets stabilized? No one can stop him since he is threatening everyone with nuclear weapons. I think he is an inadequate man.

You can also read an interview with another refugee, this time with Alyone. Consider support is in our help to Ukrainian refugees. For more information about donating, click here.