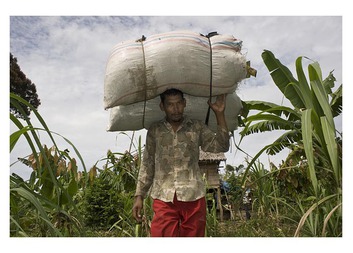 Patchouli is an essential oil used in cosmetics, perfumes, soaps and insect repellents. It is in high demand around the world and cannot be reproduced in the laboratory. The patchouli shrub requires nutrient rich soil, high levels of rainfall and adequate sunlight to thrive. These conditions combine to form a paradise for the plant on the northern tip of the Indonesian island of Sumatra: the Aceh Province.

Aceh is a land of pristine beaches and tropical jungles. It has rich soil and abundant natural resources, but the recent history of the province is marked with catastrophe. For thirty years an armed conflict raged in Aceh between the separatist Free Aceh Movement (GAM) and the Indonesian army. The conflict moved farmers away from their fields and caused a significant drop in exports. The economy of the province eroded and patchouli growers suffered; what had once been an industry became isolated farmers struggling to make a profit on terms defined by a spider web of middle men.

On 24 December 2004, a second catastrophe struck the coastal people of Aceh: the Boxing Day Tsunami. Waves more than three stories high crashed into the capital city Banda Aceh and the west coast of the province, killing more than 170,000 people. The world reacted to the Tsunami by mobilizing the largest humanitarian response to a single disaster in history. In Aceh alone, it is estimated that USD 2 billion was spent on reconstruction and development. A group of government donors pooled funds and created the Multi-Donor Fund for Aceh and Nias. One project of the MDF was the Aceh Economic Development Financing Facility (AEDFF), coordinated by the Indonesian Ministry of Planning and the Ministry for the Development of Disadvantaged Regions, with oversight from the World Bank. Caritas Czech Republic was selected to implement a project for the economic development of the patchouli industry funded by the AEDFF.

From October 2010 until September 2012, Caritas Czech Republic administered an AEDFF project budgeted at IDR 43,700,000,000 (USD 4,900,000). The project developed four independent cooperatives of patchouli (known locally as nilam) growers. The project worked with location government to reach more than 2,900 beneficiaries in the districts of Aceh Jaya, Aceh Barat, Aceh Selatan and Gayo Lues. Four cooperative centers were constructed and fully equipped and thirty-four stainless steel distillation machines were delivered to the cooperatives. A forum was established, and the cooperatives are currently in the process of obtaining Geographic Indication protection for the special quality of patchouli produced only in Aceh with the Ministry of Justice. The project has made a significant impact to the economic development of patchouli growers in Aceh.

The project is built on four pillars:

This documentary series walks through the production cycle of patchouli and illustrates the components explained above. The series documents construction and installation of distillation machines provided and explains the testing process for patchouli oil, as well as highlighting individual beneficiaries.

As part of the Nilam Aceh project, Caritas CR commissioned a documentary series of photographs by internationally known Czech/ Canadian photographer Iva Zímová. The series documents project developments and the lives of the beneficiaries.

Iva Zímová was born in the former Czechoslovakia. She graduated from the School of Industrial Art in Jablonec nad Nisou, specialized in jewelry making (1977). In 1982 she escaped communist Czechoslovakia and became a refugee, immigrating to Canada where she studied at the Dawson College Institute of Photography (1987–1990) and then at Concordia University majoring in photography (1990–1993).

In 1992, she was awarded the Canada Council Grant to photograph Czech minorities in Romania and in 1993, she received grant of the Ministère de Culture du Québec to document native people of northern Québec. In 1994, she was contracted by the Canadian International Development Agency (CIDA) to document aspects of everyday life in Ukraine. In 1999, she documented the diversity of CAW workers (National Automobile, Aerospace, Transportation and General Workers Union of Canada).

Since 1997 she has been contributing her work to the Czech NGOs. She has exhibited her work in the Ukraine, China, Canada, Czech Republic, Ethiopia, Russia, Georgia, the United States, Jordan and Mexico. Iva lives for her photography and uses her manifest talent in the service of the persecuted and the forgotten: Indians, refugees, orphans, and the deeply impoverished. Her camera does not condescend to pity her subjects; it humanizes their plight and ennobles them as survivors that few will ever know.

Please, have a look at the pictures created for Caritas CR of the patchouli growers of Aceh - visit photogallery A documentary series of pictures from Indonesia.