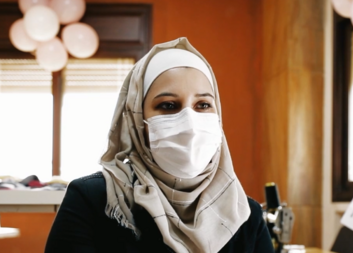 War forced Eba from Syria to leave her home. Caritas helped her to start a business of her own

Taftanaz is a small town in northwest Syria with only 15,000 habitants. The town has become one of the main targets of the Syrian civil war as it is close to the strategically important airport. Many of the town’s residents have paid the biggest price. As have nearly 50 members of Eba Ghazal’s family.

In April 2012, the Syrian army decided to seize the airport and started a massive shelling of the city. According to several sources, the army did it as revenge for losses in previous battles. The attacks claimed 62 lives and forced most locals to flee north to Turkey. Up to two-thirds of the town’s residents have left due to the attacks.

Eba enrolled in our course and started her own business

The Ghazal family has lost 39 members. One of the survivors - then 20-year-old Eba - has been trying to get back on her feet ever since. She decided to enrol in a training course organised by Caritas Czech Republic which taught her project management and planning so that she could run her own business one day.

Together with her friends, Eba prepared a business plan – to start a textile company that would sell clothing. Eba received a small grant from Caritas to get started. Ever since then, her business is doing great. “We are getting new machines and more employees to keep up with the demand. My friends who know how to sew or work with wool are helping me a lot,” she says.

So far, her company supplies clothes and fabrics to friends and family, but she is planning to supply shops as well. We wish her the best of luck – she certainly deserves it.

The civil war in Syria has been ongoing since 2011 and has claimed nearly half a million lives. It has taken the homes of more than thirteen million others. At Caritas’ training courses, locals are taught the basics of business and financial literacy, plus they receive a grant to start their own small businesses so they can rebuild their lives.